I woke up early and entered the Tennessee-TomBigbee waterway.   The Tenn-Tom was constructed by the Tennessee Valley Authority for commercial traffic.  It connects two rivers to provide a waterway from the Ohio river to Mobile, Alabama; providing an alternate route from the Mississippi River to the Gulf of Mexico.  When boating the Tennessee-Tom today, I passed about 10 barges and about 10 fishing boats.   There are marinas on this route and it is the preferred route by most long-distance recreational boaters.  Traversed 7 locks today!

In the early afternoon, Carol texted me with a weather update.  It showed severe weather approaching Columbus at 5 p.m.  I was able to avoid the storm by making it to the Columbus marina about 30 minutes early.  They gave me a great covered slip and I spent a couple of hours visiting with them while it rained.  Now, I am at a hotel washing clothes, updating the blog and getting ready for tomorrow. 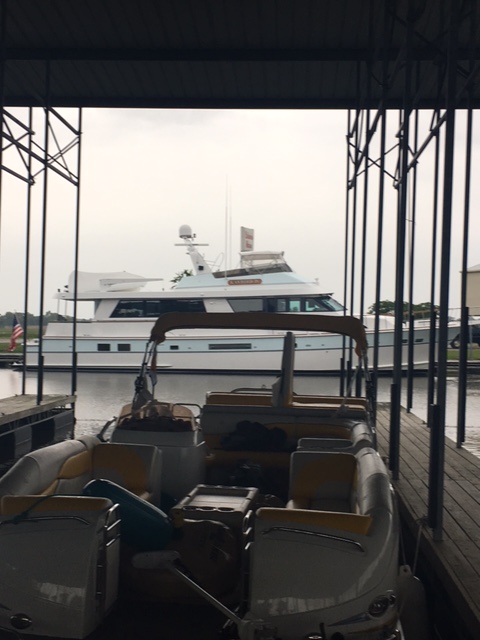 During some posts, I may discuss modifications I’ve made on the Tritoon to make it better for the trip.  Below, you can see two ATL fuel bladders ; each hold 50 gallons of gas.  These tanks plus the 55 gallon main tank allow me to put 155 gallons of fuel on the boat.  Since a gallon of gas weighs 6 pounds, it’s like sitting two 300 pound guys in the center of the boat.  Whether they are full or not, I get about the same 28 mph.   These fuel tanks give me a range of about 300 miles. 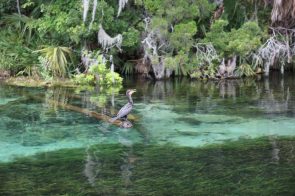 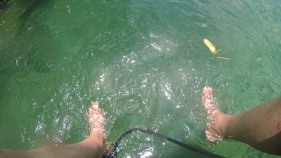